I asked Alastair, RO, for a few words on the last race on Wednesday - the following is what I received with 65 odd photos!

Wednesday afternoon 4th November - Last XOD race of 2020 season  After the recent gales that have been frustrated racing …. Wednesday weather was at the other extreme!  As crews assembled at the club at lunchtime in the fine autumn sunshine, Camber post wind had been flat lining for several hours at just Zero wind! with a gust of 0.1 knots! (I guess this was when a seagull flew past!)  All were resolved to an end of season pack up of boats in the fine sunshine. As a decision was being discussed, a nearby Toppers stemmer began to fly and the ripples spread out across a mirror like water, a trickle of sailable wind had filled in from the north?

With high tide,  it was agreed to start on a restricted club line, first mark Deep End (P), providing a close fetch and/or beat?, depending on which bit of the wind was about ? followed by mainly a run/broad reach up harbour against the first of the ebb for about half an hour, to round the suitably located Dolphin (in either direction ) and return to the club, with pick up of mooring as the finish! (thus, avoiding a struggle back against the ebb to moor)

Seven boats set out and I started the race as everyone was ready in sailable conditions. Mike and Alistair in Beaver were the first to start with the remainder of the fleet crossing within about 10 seconds!, The first leg soon changed from a close fetch to a beat as the wind died away, and wind generated by the tide became rather more relevant! At one stage it looked as if much of the fleet was in danger of being swept past Deep End, but some wind appeared from somewhere, allowing all to get up to gybe round Deep End. Spinnakers up and on to a broad reach to cheat the tide along the Bosham shore. Roger and Jeremy in Xcitation was first round closely followed by John and Sarah in Lass with Colin, Neil and Christopher in Catherine close behind. Next was Wenda, Beaver, Astralita, with Michael and Chris in Veronique managing a very slick and advantages rounding gaining some distance! 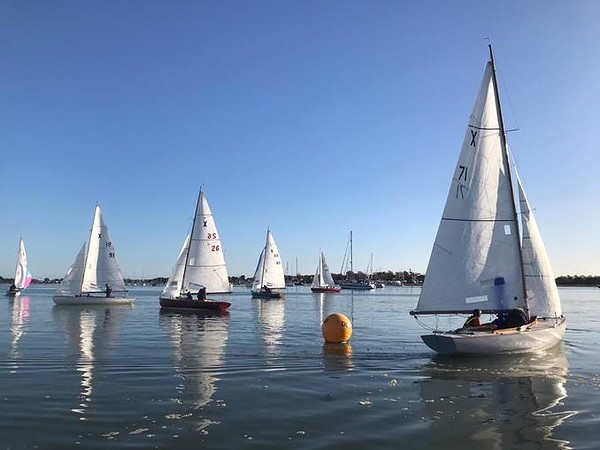 The next leg was slow against the tide, the skill was balancing getting close in for less tide, against apparently more wind a little further out. Steve and Fraser in Astralita, to escape the wind shadow of Beaver and Tom and Katie in Wenda, took an early very bold move! They crossed the tide to the Itchenor side and struggled up past the club against an increasing positive ebb!  Catherine made a similar move much further up the reach, nearer to Tuffs Hard, when Colin could see the leaders Lass and Xcitation, becalmed and dropping their spinnakers.

As RO I observed this calm descending on the fleet and was about to establish Dolphin as the turning mark; but Catherines bold move influenced my decision!?  I elected to place the Turning point just off our New Commodores Building Site at Westlands, so allowing Neil to pay homage to the new incumbent as they rounded, and allow Colin a chance to even get to this turning point?

Some new wind tricked in from the north, down from Dell Quay, allowing Roger and John to reach across to Dolphin and turn for home. Colin and team rounded next, still holding his position, with the balance of the fleet slowly filing past, choosing rounding directions to suit, with no issues! I felt for Steve and Frazer in Astralita, as their early bold move cost them dearly, so eased Dolphin towards their struggling approach to set all boats on return leg home on a now building ebb and a little more wind! 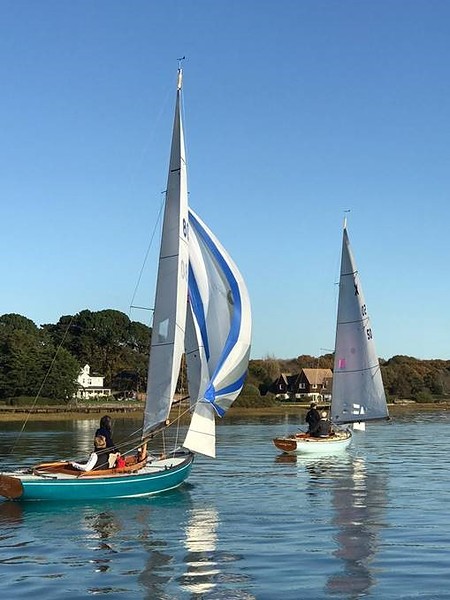 It was nice to have a couple of spectator boats, Tina and John on Elin and Joe Burnie in his fine launch

Many took the opportunity to take sails and bits off after the race and by the time most were ashore, it had become rather chilly with a very low setting sun.

A good time was had by all and Felicity and I enjoyed running the race.