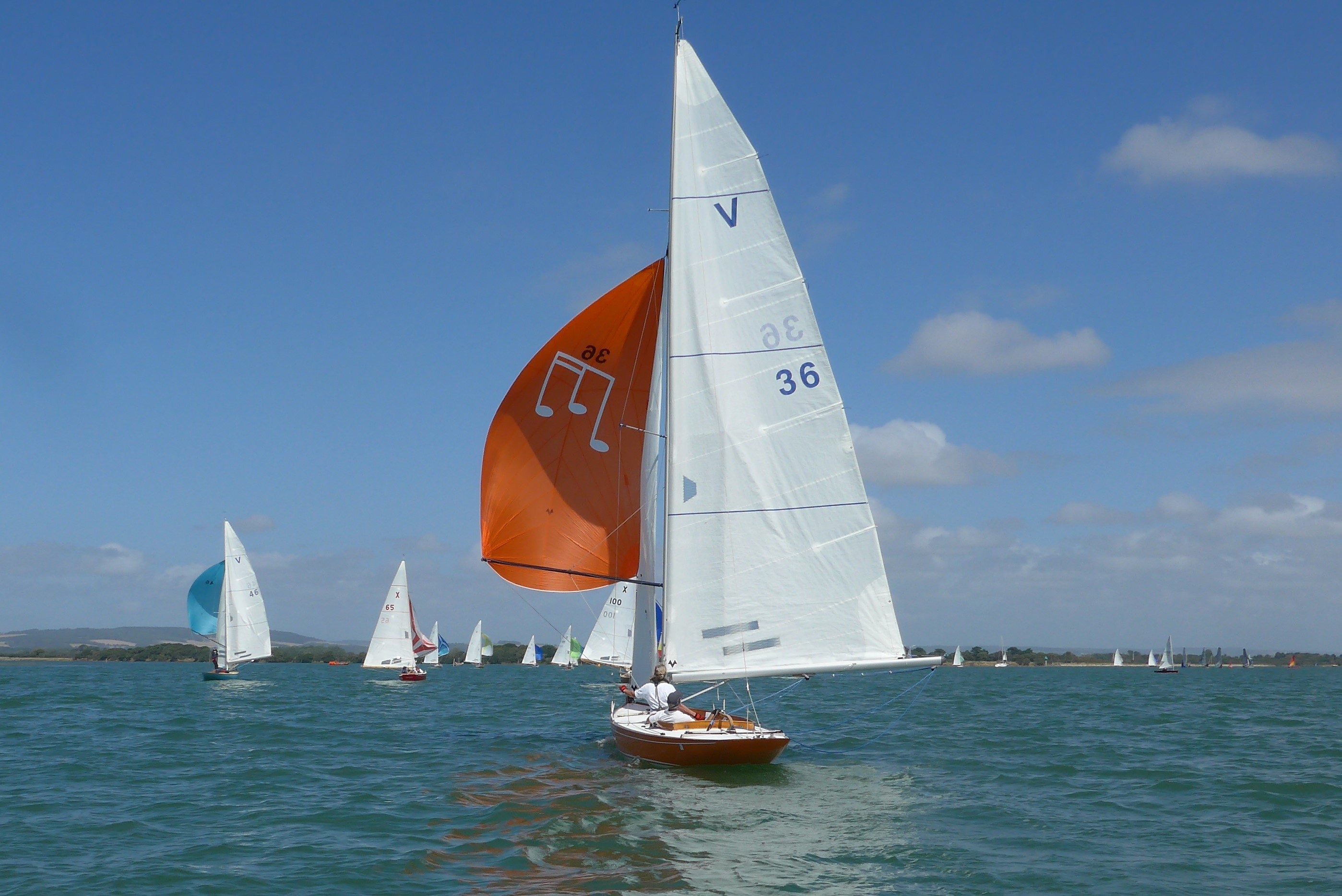 Not for the first time this year the wind forecast was spot on with Windguru indicating a maximum of 7 knots for the first day of Itchenor Keelboat Week. Unfortunately, that occurred shortly after the start and the wind generally abated during the rest of the morning.

14 Sunbeams out of the 20 entered chose to make the best of the light winds. Race Officer Roger Wickens set a long start line near the entrance to the Thorney Channel which gave the fleet plenty of options at the start with a north-east wind blowing between 5-7 knots with the windward mark situated between Peacock and Chalkdock Beacon. The majority of the fleet chose to start close to the pin end of the line which was in shallower water to the north of the main channel. The wind at the pin end gave an advantage with a big lift on port tack compared with the boats starting further down the line. However, the boats which started closer to the committee boat also on port tack had the benefit of deeper water and a stronger flood tide 40 minutes before high water.

V68 Sky led the boats at the pin end, V25 Query started some way down the line and V18 Polly started at the Committee boat end. After this relatively short beat Query lead narrowly from Polly and Sky. Thereafter, in a dying wind the fleet faced a long broad reach against the tide to Ella Nore. Polly overtook Query on the reach with Sky in close company. Behind them V1 Dainty and V41 Fleury emerged from the pack. Sky edged into the lead on this downwind section and was able to gybe ahead of Query and Polly at Ella Nore. There followed a reach to Lowles and a beat back to Rookwood in neutral tide. Sky, Query and Polly all tacked round Lowles onto port for the long upwind leg back to Rookwood. The wind at this stage was shifting enormously and it was a trade off between pointing up to the lay line for Rookwood against speed through the water.

Sky sailed low and this appeared to pay off and she was first to get a new band of wind towards the Itchenor shore. Query followed and they had a comfortable lead over the rest of the fleet. Polly was becalmed just before Rookwood. V1 Dainty had rounded Lowles in fifth place but chose to tack inshore well to the north of the Stocker bank and picked up a lovely lift off Pilsey Island which helped put them back into contention and they rounded Rookwood in third. By now the tide had started to ebb slightly and with the wind reducing to under 5 knots the tide carried the fleet back down to Johns Folly where the course was changed with a short leg to the finish at John Davis. Sky just managed to hold off Query for the victory. Behind them it was a game of snakes and ladders. Fleury crept ahead of Dainty in ghosting conditions. Polly, Betty and Bryony got swept past Johns Folly by the tide and this lead to some frantic spinnaker hoisting in order to make it back round. In the meantime, Comedy and Little Lady managed to make it round Johns Folly with no such drama. At this point, Roger Wickens made the sensible decision to abandon the race with the boat placings decided by their respective positions at that point. No-one could accuse the Class of not having close racing with three boats sharing seventh place!

The good news is that slightly more wind is forecast for day 2 of Itchenor Keelboat Week!

Day 2 of Keelboat Week provided superb sailing conditions for the 20-strong Sunbeam fleet which started the race in a 10-13 knot SSW wind which gently veered more south-westerly during the course of the race.

Race Officer Roger Wickens laid a long start line with the Committee Boat approximately 100 metres downwind from the Pilsey Post, the pin to the east in deeper water and the first beat to a laid mark close to East Head. The fleet was evenly split between those who chose to go right or left up the first beat one hour before high water. Of those who chose to go left up the first beat, V18 Polly won the pin closely followed by V41 Fleury. However, the favoured side was the right-hand side with slightly better pressure up the middle along with a lee bow on port tack pushing the boats to windward. At the first windward mark V61 Betty sailed by Peter Taylor and Robin Richardson led from V1 Dainty, sailed by Peter Nicholson and Gordon Currey then V17 Comedy, V68 Sky and V46 Spray. Polly and Fleury rounded in sixth and seventh, not too far back despite choosing the wrong side. There followed a two-sail reach to Johns Folly.

The tide was still flooding moderately during the next beat to Roger Wickens favourite mark Beach! As a result, most boats chose to sail on a long port tack towards the Winner Bank, thereby staying in the shallower water for longer. With the relatively flat water it did appear to be an advantage playing the shifts once over the Winner Bank. However, as is often the case, the boats which chose to tack closer to the beach at East Head did not fare so well as those who sailed over the top of the Winner Bank until they hit the layline for laying Beach on starboard tack. Fleury played the shifts successfully up the beat and went from sixth to first at Beach, overtaking Betty on the last tack for the mark. Polly moved up from fifth to third, whilst note must be made of V64 Maisy, sailed by Chris Moore, Sue Smith & Peter Goddard who had a cracking beat taking them up to third until they had an issue just before Beach!

With the time now ebbing the fleet sailed as close to the beach at East Head as possible. Betty and Fleury appeared to be in match-racing and ignored the tide sailing straight down the middle to the finish near Chalkdock beacon. Polly once again overtook Dainty sailing further inshore near Dunes but Dainty chose to thereafter run to the finish down the Itchenor shore as did Sky and Query, whereas Polly and Comedy ran down the Thorney shore. With the ebb tide still relatively slight, it didnt appear to make much difference which side was chosen although Dainty did overtake Polly for the third time and Query overtook Sky.

Day 3 the final day was cancelled due to the strong wind forecast.