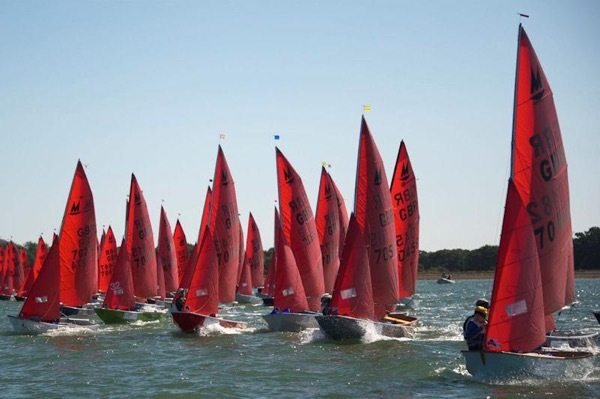 What a great event! The idea to run the 2015 Mirror National Championships alongside Abersoch Mirror Week was judged to be a great success, with 86 Mirrors on the water, 43 in both fleets. Mirror Week is a great institution that has so often been the first event for many top sailors from the North West and seeing Mike and Katie Budd and Craig and Gabriella Burlton, with a host of National and World Championships between them, was a great example of what a great little boat the Mirror is for introducing children into sailing and racing.

Itchenor entered 9 Mirrors and came away with a clutch of trophies including; Eleanor Keers and Izzy Pugh, an impressive 3rd overall and 1st U16 boat, Archie Grant and Maddie Hantrais, winners of the silver fleet and Itchenor SC being awarded first club overall for the fourth consecutive year.

Racing got off to a slow start with lack of wind allowing families to enjoy the glorious beach and sunshine but by mid week the robustness of the Mirror was proven with all hulls and masts returning to the beach intact having survived 30 kt gusts on 'Windy Wednesday'!

After entering the final day with a slender lead, Dave and Imogen Wade (parent and child) managed to emerge as the National Champions after a very consistent final day. Unfortunately ISC's Eleanor Keers' crew, Izzy Pugh, was injured on the last day, so Eleanor was unable to match her earlier results. This allowed Angus and Florence Hemmings (parent and child) to nip in to take 2nd and Eleanor and Izzy were 3rd overall but still deliver a very impressive 1st U16 boat. While the leaders concentrated on consistence, this left others to take the race wins, with Nigel Thomas and Benjamin Bradley (Hill Head SC adult and child) and George Richards and Fraser Hemmings (RLym YC/Stokes Bay SC U16) winning races 9 and 10 and then Robert Richardson and Sandy Simpson (RWYC/Ullswater YC U16) finished with a flourish by winning races 11 and 12.

Lots of great performances were evident but a special mention is worthy for Brenden May of Mounts Bay SC. Sailing in his first championship with dad Denzil, not only did he compete in all races but also finished 14th overall - all achieved at the age of 4 years old!

A wonderful but demanding week. Good to see close competition between top parents and the National Junior Squad sailors. It was also a pleasure to have sailors from the Cadet and Tera fleets competing - showing the benefits of sailing a number of different classes to build up experience. The wooden boats competed on a level playing field with the high quality Winder-built foam sandwich boats - and a gaff-rigged boat also finished 29th.

Looking to the future the 2016 Nationals will be at Itchenor SC at the 27th August - 2nd September and 2017 sees the Mirror World Championships return to UK for the first time since 2009, at Restronguet SC from 25 July to 4 Aug.

Report by Rob Bellfield (with amendments by Mike Jefferies)