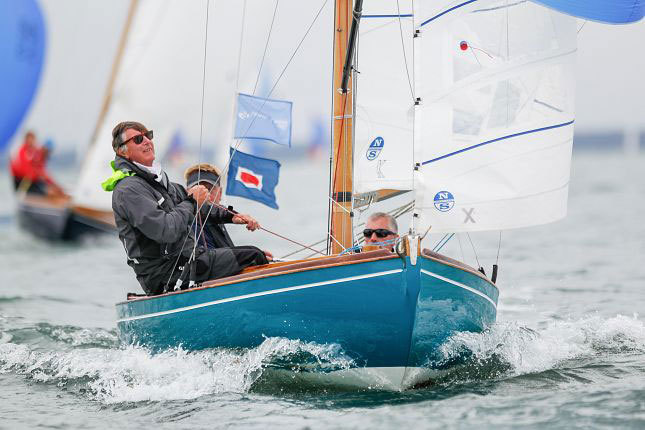 It is said that winning becomes a habit. For John Tremlett and his crew in the XOD Lass from Itchenor Sailing Club it certainly is just that. At Cowes Week this year John won the prestigious Captain's Cup for the sixth consecutive time - a record. The XOD class has been consistently one of the largest and certainly the most competitive class at Cowes.

This year there were 47 other boats to beat, many with helms who are champions themselves, and the Lass team did just that in four of the eight races. This created a winning margin of 15 points over the second place boat sailed by class captain James Meaning from Yarmouth. Two other Itchenor boats filled the third and fourth places Foxglove with former champion Al Ashford on the stick and the consistently performing Catherine sailed by Colin McKinnon and Neil Hart.

The strength in depth of the Itchenor team resulted in the club winning the interclub competition for the Phillipson Shield for the eighth time in a row.

It was a similar story for the Sunbeams as Roger Wickens and his crew retained their title and took home the Betty Moore trophy for the 12th time.

14 Sunbeams took to the water this year, for a fantastic week of racing at Cowes to celebrate the Class' 95th anniversary of racing at the annual event.

Getting off to a great start, V26 Danny instantly took the lead, winning the first race and taking podium positions on day two and three. Day four saw winds ranging from 3-20 knots with some wild fluctuations in direction. The real excitement occurred on the long beat to the finish when the wind shifted 45 degrees. The majority of the fleet sailed behind the bramble bank to avoid the tide. Firefly managed to stay ahead of Danny with Penny in third.

However Wednesday provided the strongest winds of the week with 25 knot gusts. Polly took an early lead but overstood the first mark. Danny led to the finish followed by Firefly with Penny in third and V6 Little Lady finishing strongly in fourth. Danny led the fleet to the finish line again on Thursday, with Polly, Melody and Firefly battling it out for second and third place.

Once again, Polly had the best start on Thursday and led at the first mark, but Danny overtook Polly and led to the finish with Melody in second. Polly inexplicably missed the finish line so Firefly finished third. The final race was abandoned due to the 40 knot winds, but with four first places, Danny retained the Betty Moore trophy as the Class celebrated 95 years at Cowes.