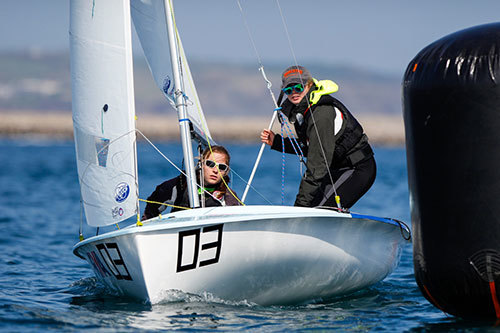 Isabel Davies and Gemma Keers from Itchenor Sailing Club are the top girl team in the selector trials and have been selected to represent Great Britain at the International 420 world championships in Japan. Also selected is Izzy's twin sister Katie who, with her crew Grace Summers from Emsworth, achieved a podium finish in last week's 420 youth national championships at Weymouth.

Izzy and Gemma were in a strong position for selection being the top girl boat at the 420 inland water championships held on Rutland Water in March. A solid 6th place finish overall (4th girl boat) at Weymouth ensured their place in the team for Japan.

Katie and Grace moved into contention as they put down a series of consistent scores last week. Winds in Weymouth Bay were fickle during the week meaning postponements and course changes were the norm on most days. After two days, three races had been possible and the Davies/Summers team had a 12th, 4th and 7th out of 42 starters. It was on Wednesday that they made their move on courses laid in Portland Harbour. Following an 8th they led from the start in the 2nd race and were never headed. Grace commented: "We had a good start in the middle and good boat speed. We tacked on the shifts and managed to stay calm. It was exciting to be at the front." At this point the girls moved to 2nd overall one point behind the leaders Sarah Norbury and Mari Davies (no relation) from South Staff and Pwllheli respectively.

Thursday was frustrating as the sea breeze brought in the fog to blanket the race courses and no racing was possible.
It was therefore all down to Friday's races with several boats in contention. A disappointing 18th followed by a storming 1st for the Davies/Summers crew meant that the final race was the decider. Jenny Smallwood (Datchet) and Danielle Thomas (Lymington) rounded the windward mark first followed by Katie and Grace. Norbury and Davies looked as if they were out of the game until they put in a spectacular first reach to bring themselves back into the leading pack. At the finish it was so close. Norbury and Davies took first place overall one point ahead of the Smallwood/Thomas team. Katie Davies and Grace Summers exceeded many expectations and were rewarded with the third podium place just two points off the top spot.

Izzy and Katie Davies and Gemma Keers can look back on the many hours spent training and practising manoeuvres from their early days in Mirrors at Itchenor's Junior Fortnight through to national squads. Their determination and dedication now has its reward with places in the national team for the world championships and also the European championships in Bulgaria during August. Never has the old maxim that time on the water is well spent been more true.