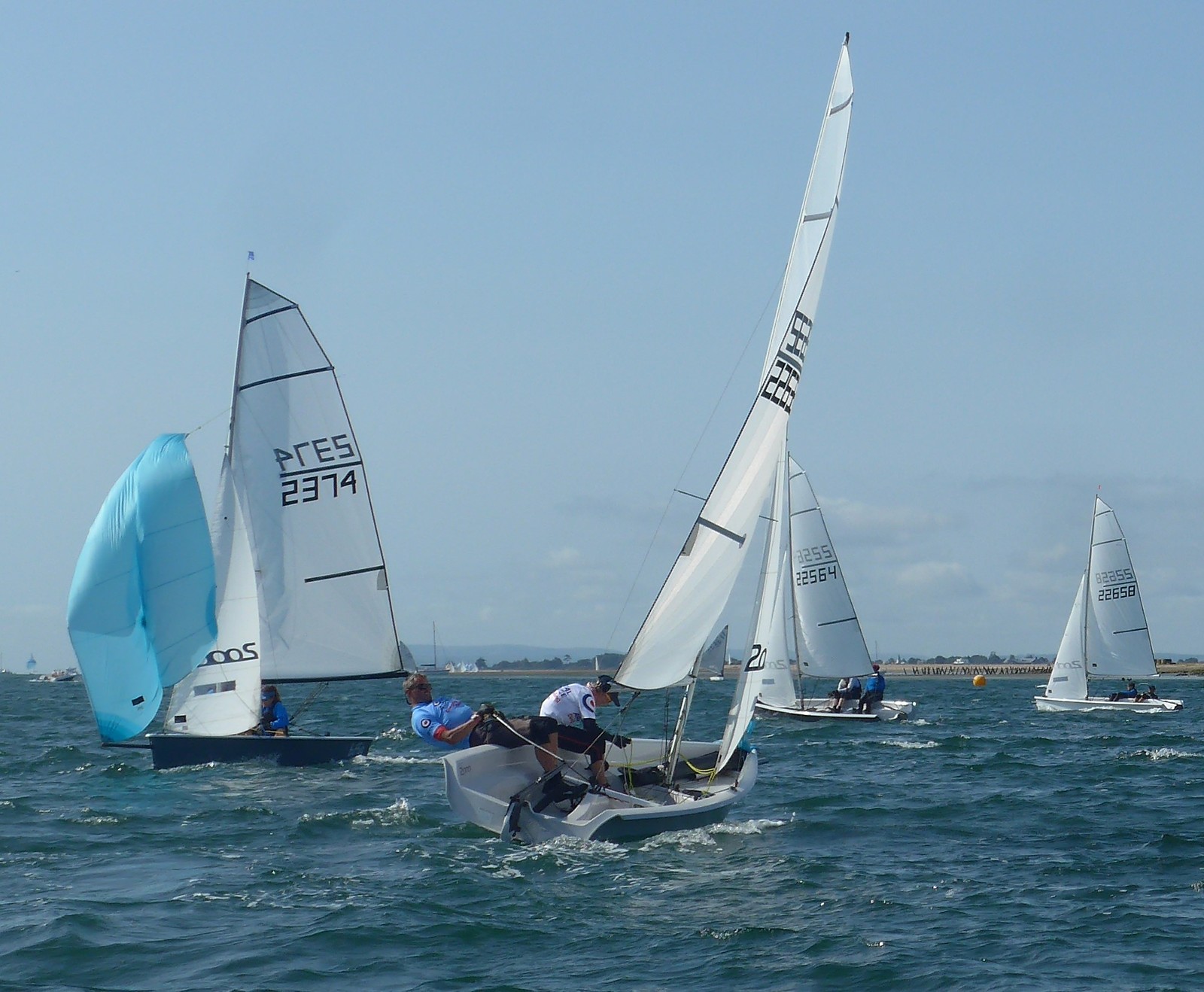 A small, but quality fleet of ten visiting boats, two from Wales, joined one home boat at Itchenor Sailing Club on the weekend of the 12/13th September for round 3 of the 2000 class Millennium series. The weather was perfect and provided competitors with champagne sailing conditions and lots of decisions about tides, gusts and shifts.

With low tide at approx. 1.20pm, Saturday's racing began on an ebbing tide and a small compact race course. A simple windward, leeward course was set and crews began to decide which way they needed to sail in the 10kt breeze to offset the tide. During the course of racing the tide turned and began to flow back into the harbour adding to the decision making.

It soon become clear that Rob and Sarah Burridge and Johnny and Matt Sargent were going to be battling it out all weekend. Johnny, crewed by Dad Matt, was competing in only his 2nd 2000 Open Meeting and soon showed that he was not intimidated at all by the task in hand. Rob and Sarah won the first two races and Johnny the third. Johnny and Matt finished day one with a 2,2,1. Helen and Andrew Phillips showed consistency and pace all weekend to finish day one with a 4,3,4.

The breeze was a little stronger on day 2 with the tide due to be ebbing all day. The same course was set close to Roman Transit across the main channel which led to some interesting moments as a fleet of keel boats began sailing through the start line minutes before the 2000 start. Simon Horsfield and Katie Burridge joined the racing on day 2 with Katie helming and Simon crewing.

There was a definite difference of opinion amongst the racers as to which way to go down the run. Should you sail across the ebbing tide first and run down the starboard side of the course or hug the shoreline on the port side and then stem the tide at the end of the run towards the mark? Those that chose the latter had to ensure their rudder downhauls were off as touching the bottom was definitely a possibility.

The winner of the event was decided, as so often is the case, on the last run of the last race. Running down the middle of the race course, Rob and Sarah and Johnny and Matt were having a titanic battle, swapping first place several times before Johnny and Matt decided to gybe to clear their air and this one manoeuvre allowed Rob and Sarah the win giving them the overall result. Johnny and Matt were second and Helen and Andrew finished a brilliantly consistent weekend for a well-deserved 3rd place overall.

Thanks must go to Joe Gallivan who stepped in to crew one of the Itchenor support boats and spent the weekend assisting the race officer in moving marks and providing cover. Thanks go to Jonathon and Petrina (and Katie on the Saturday) for also providing support cover in a rescue boat from Thorney Island Sailing Club.

Katie deputised brilliantly for an absent Kev O'Brien to bring Facebook live commentary to those unable to attend the meeting.

It was fabulous to see so many family groups competing, Rob and Sarah, Johnny and Matt and Ed and Ruben Dodwell. It is a testament to the class that it is possible to have close, tactical racing between crews of mixed ages and weights in all different wind conditions. 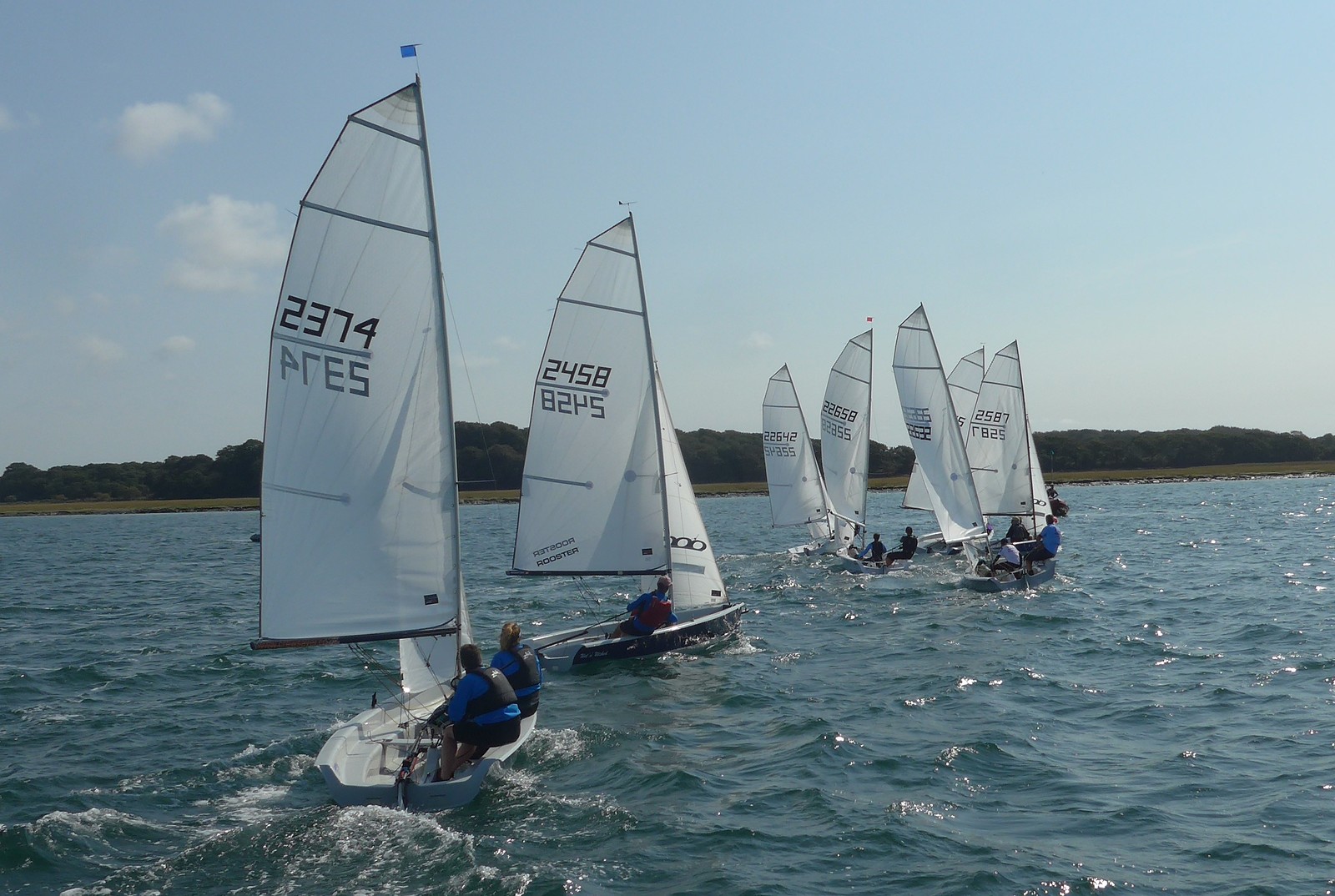