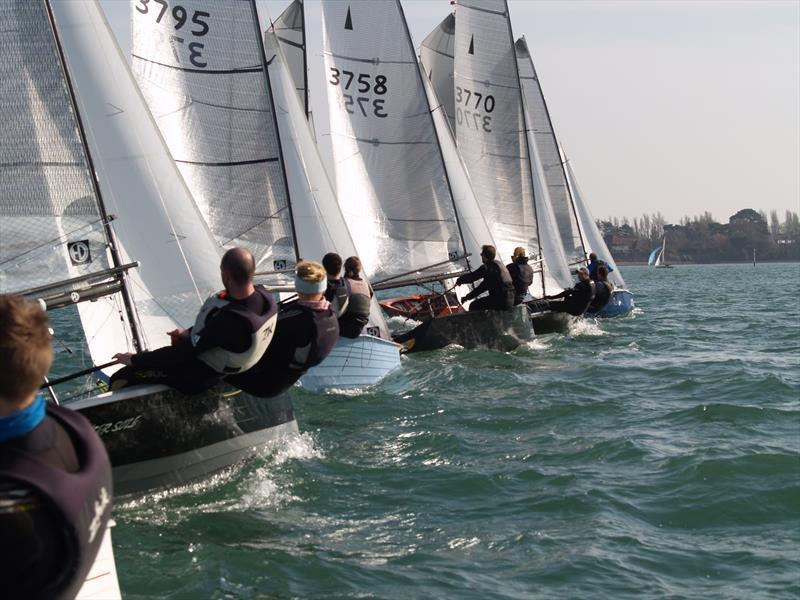 A frosty cold morning greeted the Merlin fleet at Itchenor on the first weekend of the 2020 Itchenor Winter Warmer, but the clear skies and 8 boats made for a glamour day on Chichester harbour. PRO Roger Yeoman ensured the fleet that once they arrived at the race course, they would be greeted with a F2 shifting Northerly and he duly delivered.

With tide against at the start, the fleet were a little shy of the line on race 1 but Roger Phillips & Chris Kilsby made the most of the opportunity and broke away from the fleet getting round mark 1 first and as the wind died used the tidal gate to extend away and never been seen again. Andy Shaw & Pippa Horne saw the new breeze filling in on the shore before the rest and sailed into a well deserved 2nd in their first Merlin race, followed by Taxi & Pip and Caroline & Chris Gould.

Race 2 and the course had spun round into the full expected Northerly with the tide now pushing the fleet over the line. Rog & Chris K got away again, with a small bundle stuck at the pin end (which was actually the committee boat, very confusing). A bit of a battle royale was appearing for the top 4 places, but this time it was Caroline & Chris G who got the better of Christian & Dan, with Taxi & Pip all crossing the line around the same time.

Races 3 & 4 saw Caroline & Chris G start to take control of the group, winning both races. Christian & Dan pushed them in race 3, whilst in race 4 George & Sophie Yeoman succumbed to the pressure of the chasing pack after Caroline & Chris G nailed the lay line on the first run.

The final race of the day Christian & Dan won the pin end, sailed in to the first header and comfortably led round the top mark and as the rest of the fleet battled it out sailed to comfortably take their first win of the weekend. Rog & Chris K found their form again to finish the day strong with a 2nd and the overnight lead.

The fleet then retired to the club bar, where a nice post sailing session in front of the log burner followed by a warm curry descended in to beer pong and flip cup, river sailing and drinking = warming up for Salcombe week!

Day 2 and a few sore heads were greeted by another fresh morning. This time the PRO sailed the fleet through the doldrums outside the club and down to East Head for a change in tidal geography and a building F2-3.

Christian & Dan picked up where they left off eeking out a small lead down the first run and breaking away up the next beat. Caroline & Chris G scooted round the outside down the same run to again battle it out with Rog & Chris K grabbing 2nd after a couple of laps.

Race 7 a tight first beat saw a bunch rounding at the mark, but it was the later boats that were able to spot the breeze coming down and take advantage. Taxi & Pip took the lead and never let it go with Christian & Dan managing to make their way back across in time to hold on to second after a long battle with Rog & Chris K who were deemed to have been OCS.

The new breeze had shifted the course right for race 8, with the windward mark being close to the Thorney Island shore. George & Soph managed to get away off the pin and as the fleet tacked off they managed to hold on and hook in to a small left shift that allowed them to reach the top mark first and sail to their first race win. Behind a 3 way tussle between Rog & Chris K, Taxi & Pip and Alex Warren & Jonty. Rog & Chris broke away from the group on the 2nd beat to take 2nd with Taxi & Pip 3rd.

The final race of the day was a race home with a twist, the top mark would be leap-frogging down the windward shore with the leeward mark doing the same, slowly zig-zagging our way home. The light and patchy breeze made it tough picking a way up the first beat, but Taxi & Pip led round the top and held off the fleet giving everyone limited passing lanes. Chris G & Caroline and George & Soph were nip and tuck until the final reach home to the finish where George & Soph managed to just get away to take 2nd.

Overall it was very tight at the top, the shifty breeze and tidal harbour had left everyone with some big or inconsistent scores. However, it was Taxi & Pip that took the win by 1 point from Christian & Dan, who were 1 point ahead of Caroline & Chris G, who were equal with Rog & Chris G! All to play for with two more weekends left! Thanks to Roger Yeoman, Roddy Bridge & Olly Gilchrist for running all the racing. The next Winter Warmer is 15/16 February.