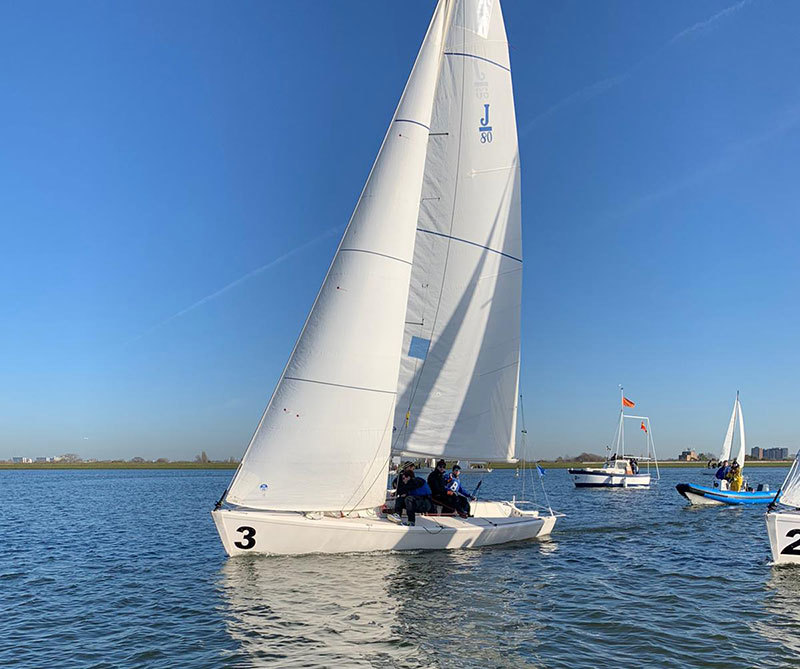 The Itchenor team arrived at Queen Mary for the Carmela Cup on Saturday morning to find a very cold but sunny day. For the uninitiated, the Carmela Cup is the RYA Open Championship of Two-Boat Team Racing in Keelboats, a niche but hotly contested event hosted by the Royal Thames Yacht Club with some of the best team racers in from the UK and Ireland taking part.

Once the ice was scraped from the decks and the boats were rigged the ISC team were up first in the round-robin against the Royal Cork YC in tricky light conditions that would be a consistent theme across the weekend. With the breeze light, the substantial amount of time the ISC team had spent in the RTYC J80s over the last couple of years told quickly, with the boats helmed by Arthur Henderson's and Jonathon Pinner starting ahead and extending over the 'port square' course to take the win.

Consistent starting was happily a theme of the weekend and it was ISC's fifth race against Cambridge University before the pressure was applied. A hard-fought battle down the run extended on the final beat but was tidied up by Henderson with ISC taking first and third place and hence the win.

A quirk of the schedule led to back to back races against pre-event favourites, the RTYC, helmed by multiple Wilson Trophy winner, former team racing World Champion, and all-round team racing legend Andy Cornah, sailing alongside the equally decorated, national champion in multiple dinghy classes, Ian Dobson. Both races saw aggressive team racing around the course, with the first going to ISC on the final tack to the finish and the second to the RTYC at the last mark.

That would be the last points ISC would drop in the round-robin, making a clean sweep of first and second-place finishes in the remaining races and setting up a final against the RTYC. The wind dropped and after a slight delay, the teams took to the water in 3-5 knots of shifty breeze. These light conditions would punish an off-colour start from the RTYC, leaving them chasing ISC. Dobson applied pressure down the run, but the trimming of Rob Henderson and Tom Heywood kept the ISC bows forward and the race was secured with 2 legs to go.

The second race of the final followed a similar pattern with a pre-start penalty for Cornah giving him a lot of work to do to get back into the race. It was the final beat before a lapse in concentration from Pinner allowed Dobson from the RTYC to established a foothold in the race. It was too little too late with Henderson again tidying up the loose ends allowing ISC to hold on to win the race and take the final 2-0.

Our thanks must do to the RTYC for putting on such a well run event and completing two whole round robins in what were testing conditions for the race officers.

Full results are available at http://events.ksail.co.uk/2020/CarmelaCup/index.html