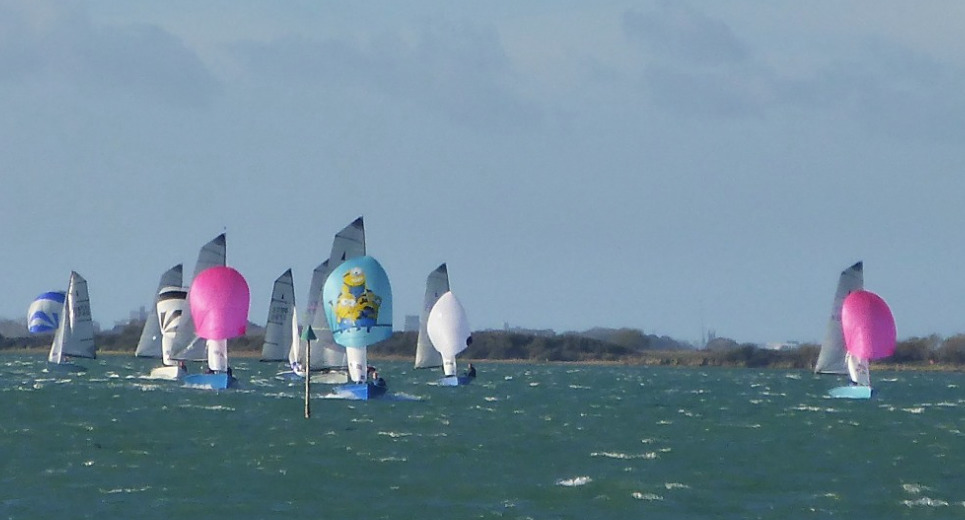 Downwind was all about finding the pressure and the angle to keep the boat planing and the racing was extremely close. The fleet headed over to the right-hand side of the course to get out of the tide up the second and third beats. Chris and Caroline extended their lead and took the win. The battle for 2nd to 5th was extremely tight with James Goss and Chris White taking second, George and Pete third, Ben Saxton and Charlotte Fildes fourth and Tim Saxton and Mary Henderson fifth.

The wind started to build for the second race and the tide has slackened off ready to turn. Ian Dobson and Arran Holman won the pin and were the first to tack onto port and cross the fleet in Ian's new ship 3784. Richard Whitworth and Jemima Scroggie, Ben and Charlotte and Ian Walker and Chris Kilsby rounded out the top 5 round the first windward mark. On the first downwind leg, James and Chris managed to find the mud bank whilst planning in 25+ knots and capsized. The second beat saw the wind build with gusts coming through at 27 knots. Thankfully this squall didn't hit whist the fleet was heading downwind, Ian and Arran leading with their minion spinnaker flying away from the rest of the fleet with Richard and Jemima being chased down by Ben and Charlotte. The battle for 4th to 7th was extremely tight with the four boats piling into the line together.

The fleet headed in after the second race which meant that Ben and Charlotte took first spot with Ian and Arran and second and Caroline and Chris in third. With only 4 points splitting up the top 7, its safe to say it was fantastic racing! A big thank you to George Yeoman and Itchenor Sailing Club for putting on a fantastic days racing. The Merlin Rocket Craftinsure Silver Tiller Dinner prizegiving with all the sailors dusting off their tuxes and dresses was a fantastic way to end the season.