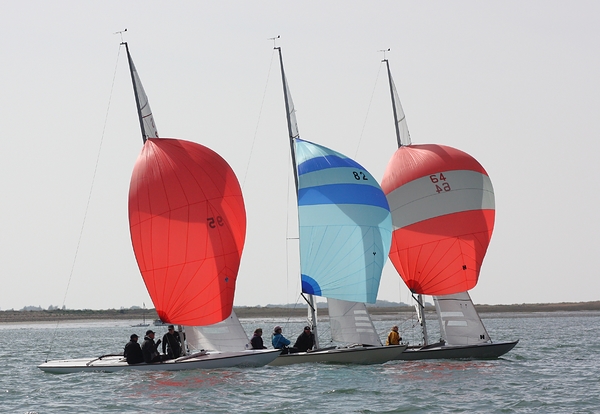 We saw a competitive fleet of 15 Swallows out for the first weekend series of the season for the Belgian Plate. And good to see Peregrine S84 (Bob Sharpe) back in the harbour.

After a delayed start to allow an 8kt wind to settle and a  general recall (surprising given the strong flood) we were off at the second attempt under a black flag. PRO Chris Blevins was taking no further nonsense. Swift (Jon Perry) led out through a couple of short but difficult beats before the run home to finish first in her first race of the year, after a close battle with Skua (with her shiny new boom) and Osprey.

The afternoon race was a similar 8-10 kt from the SW. After a short delay the tide-assisted beat from near Park to Dunes was a delight, but the strong ebb at the mark combined with leaders turning onto the run caused much mayhem and amusement.  On the run down Skua and Gwaihir went north to their advantage while the rest of the fleet scraped along the East Head shore.  The two leaders were never more than a couple of boat lengths apart with Gwaihir pulling through on the final run to win. Marengo managed the following bunch well. Gwaihir, Skua, Marengo.

It had been a long, challenging but enjoyable day on the water. The BP Supper in the evening was well attended and good fun.

Sunday dawned with little wind. A postponement to noon to allow a slight breeze to pick up and take us closer to HW made sense. Something gentle filled in from the SW and a smaller fleet set off to Ellanore. Osprey was away cleanly and led at the windward mark, but a difficult second beat from Astra to East Head allowed Marengo through, with Skua, Svala and Bluff all close. The breeze was now dropping and a final run now against the ebb painful. The top few boats continued to scrap it out with Marengo leading Skua and then Svala. A Q flag finished the fleet and we were towed home. Race 4 was abandoned and therefore all sailed races were to count.

So overall Skua, helmed by Harry Roome, won the RYCdeB Plate with a three second places. Over a difficult three races this consistency was an achievement. Marengo, Gwaihir, Osprey and Svala took the other top five places.