The Norman Moore Trophy for Swallows

With 17 25 knots of breeze forecast for the Saturday of the Jubilee Weekend a determined fleet of 15 Swallows went afloat to race for the Norman Moore Trophy, the Swallow Class In-Harbour Championships at Itchenor Sailing Club.

Running out of space to display the course for race one some were wondering if Nigel Pattison and his race team had forgotten that two back to back races were scheduled for the morning,  but the fleet got away cleanly with the highly tuned and super-fast Osprey under Jeremy Sibthorps captaincy and some old Int 14 grunt/experience in Bob Sutherland and John Hodget going well off the line and controlling the race to the end.  The fleet behind encountered some new navigational hazards off East Head, with Carolyn Brigg's Marengo striking particularly hard, but they recovered quickly and turned on the afterburners and finished a strong second.  The top three were rounded out by Spectre with Jonny Pudney, ably crewed by Adrian Fisk and Julian Hantrais.

Just as the fleet was ready to head for a well-earned lunch it was clear the Race Officer had other ideas and had set up for back to back race 2.  The breeze was starting to take its toll with 12 boats on the start line and two to later retire with gear failure.  Again, the fleet got off cleanly and despite the strong wind, it was the lightweight crew of Harry and Prue Roome and Helen Williams in Skua taking control at the front after a rare visit to the fourth quartile of the fleet in the first race.  The close racing the Swallows enjoy so much was exemplified by boats in positions 2-8 arriving at the leeward mark all overlapped. Osprey put in another strong performance coming in second with the top three again rounded out by Spectre having been chased hard by Svala who came in fourth for the second time in the morning.

With the breeze still up for race three the race team set a testing harbour course taking the fleet to Channel and back with several challenging beats and champagne spinnaker legs.  Racing at the front of the fleet was close with several position changes. Svala was leading at the final mark but with a long beat back to the finish Spectre was able to use their extra weight to good to avail and after a lengthy tacking duel just managed to hike their way into the lead before the Gallon Line with Osprey rounding out the top three. So a great days racing had three different winners, in a fleet showing great strength in depth. The day was rounded off with a cream tea on the lawn at Itchenor sailing Club before the evenings Norman Moore dinner, with some members of the class carbo loading clearly expecting a windy Sunday.

On Sunday the forecast of lighter winds encouraged two boats that had not sailed on Saturday to join the fleet. Conditions were more variable than expected with the morning wind dropping away in the two minutes before the start favouring those boats positioned at the committee boat end and lightening further to stretch the fleet out after Thorney on a fetch to a shortened course at Peacock mark. Spectre finishing first followed by Svala second and Echo third.  The hopes over lunch of more consistent wind forecast for the afternoon proved overly optimistic with the wind becoming light for most of the fleet turning the run from Eleanor to Lowles into a strong tidal gate, enabling Echo to be the only boat to finish with Skua second and Svala third on the Q flag.

Charles Hindson and his teams strong performance in Echo won them day two but it was the strong overall performance of Jonny Pudney, Adrian Fisk and Julian Hantrais in Spectre that secured them the Norman Moore trophy for the second year running.

Full results are at https://www.itchenorsc.co.uk/swallow-7/untitled-124

The photo gallery is at https://nationalswallows.smugmug.com/Norman-Moor-start-and-accidental-video-4-6-22/ 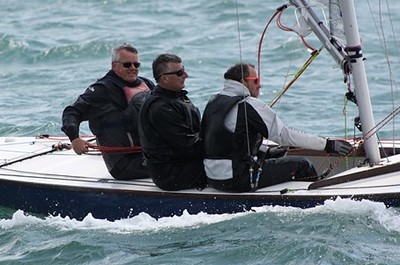 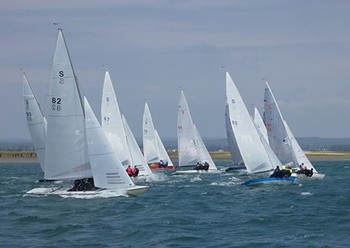 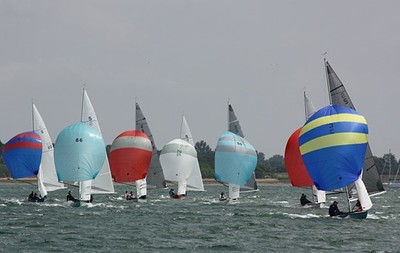 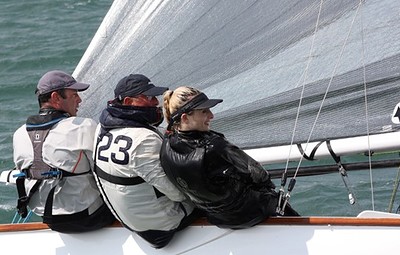