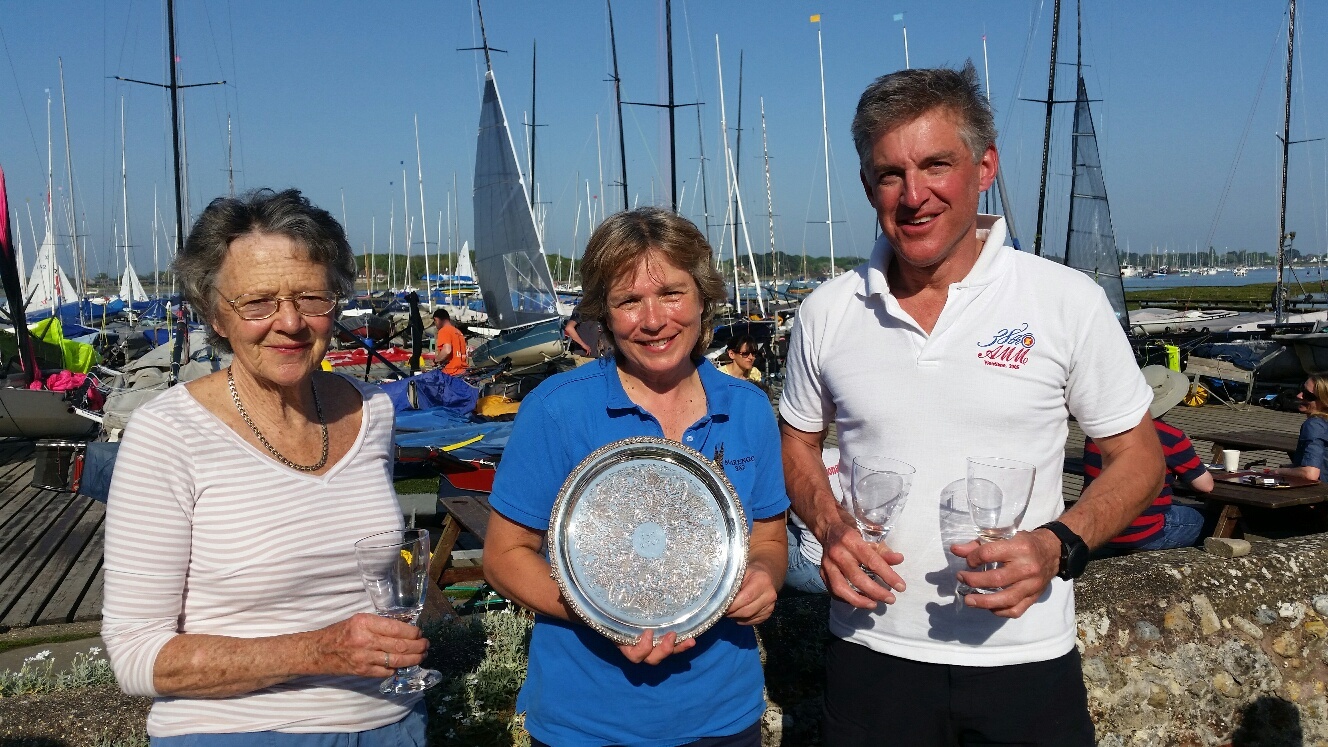 ....and third placed team Swift. Second placed Skua team had to leave early and before the prizegiving hence no pic (though Nick Boyd who had sailed with them on Saturday collected their prizes).

Fabulous warm weather - but not a lot of breeze. 15 boats took part at various points with a 13 boat fleet for R1. It was to be frank a rather diabolical line near to the goalposts after waiting for the SE breeze to settle. Darter seemed to sense where to be and tacked immediately on to port from the Committee boat end and was off into the distance. Solitude just about kept her in their sights and gleefully noted when Darter hit the bank near the tripod (but then so did more half the fleet at some point in this 2 lap W/L). Marengo was 3rd. R2 was from a Park start and with the bias wrong yet again there were shenanigans at the CB end. After yet another contretemps shortly after it was Marengo who emerged leading up the Thorney side and was never challenged although Darter got close and Skua latterly joined the front group to finish 3rd.
There was an interminable wait for the Sunday morning forecast breeze to materialise & settle at one point we were offered a 200yd long W/L before sanity prevailed and BV moved to intercept the new wind. Marengo was imperious in this one (is this always the case in light conditions?!) and effectively sealed the overall win with a race to spare. Swift (crewed by representatives of the front row) glided through the fleet to 2nd place and Archon was 3rd. Theoretically Darter could still pull it out of the bag in R4 but Marengo applied a soft touch pre-start match-racing cover and Skua found her mojo once more whilst Swift defied their heavy weather advantage to finish 2nd with Archon 3rd.
1st 82 Marengo (Carolyn B, Sue G and David S)
2nd 3 Skua (Harry and Prue R and Helen W)
3rd 7 Swift (Jon P, John T and Peter B)

NB Jackets for the boys (and ties if you still have one!).
The ISC Club regatta is on Saturday 2 June. Programme is as per the Handbook we shall have a quickish 2UP race at 10.30 and then the Shippam Challenge Cup race starting 15 minutes earlier than normal at 13.55 (tide/programme dictates). It is a grand piece of silverware presented in 1929 and won last year by Gwaihir.
Those that enjoy a mid-Solent sojourn for either Cowes Classics Week or Cowes Week should enter pronto. In the case of CCW we will get our own start only if we have sufficient boats entered by mid-June and in the case of CW just to save on the entry fee!
The Bembridge SC visit on 9/10 June. Please support this event by both assisting with the crew swap obligations on Saturday afternoon and by coming to the dinner that evening. We are at BSC for our championships next year.
Points Week the social programme is HERE. Please make all your required bookings with the Club.
Immediately after are the CYC and TISC regattas - our support makes their days!

The Ponder Challenge Cup
Three races, all to count, one trophy so good behaviour required! Eight boats sailing and with two recently launched boats boosting fleet numbers. Good to see Curlew back on the water. PRO Joe Burnie was making the most of the zone marks in the tricky and light SE and with a big tide to contend with too. Osprey in only her second outing found conditions much to her liking and won what she hopes will be many trophies - but she did not have it all her own way with Solitude and others putting up a decent fight.
The morning race took us round zone marks to and from Lowles. Solitude led for much of the way but was caught by Osprey on the penultimate leg. For the b2b pm races we went to SW Pilsey both times and then had a nice beat back to East Head. In R2 Osprey lead from start to finish followed by Solitude and Whimbrel. The final race was a challenge starting on the flood and finishing on the ebb with the wind dropping away towards the end. Solitude's useful lead was eroded on the painful beat to E Head when Whimbrel punched in towards Pilsey with a brave left hook and struggled over the shortened course finish line to win. Osprey finished 2nd - a few boats thought better of the expiring conditions and joined a mass tow-in back to the moorings against the building ebb. An enjoyable day's racing in fine and warm weather.
1st 95 Osprey 4 points (James, Jeremy and Rob)
2nd 67 Solitude 7 points (Andrew, Anthony and John H)
3rd 60 Whimbrel 8 points (Peter, Michael and Ali G)
In the Annual team racing match against the O&CSS on Sunday by 1615 after six races with no sign of the always fickle wind returning the result was declared a draw.

You might recognise the captains of the ISC and the O&CSS! The trophy was presented by Richard Thompson.

And almost finally....
Brass tacks
Bumper boats in the Belgium Plate: Gwaihir innocently suffered twice in quick succession at the start of R2. Firstly Osprey came from behind BV but with nowhere to go and clobbered Mark. Then a few yards on Curlew called them to cross on port but then apparently changed their mind. Result two intertwined Swallows with what temporarily looked like two rigs in imminent peril as they pirouetted around each other. Let's all be careful a downed rig is expensive to replace.
Do you have a stirrup to get back on board after an excursion from your Swallow? Peter Snell wants one after an involuntary dip on the mooring (and btw topping up that Cariacou tan during BP R2 was a bit much!).
It was just fab to have 40+ diners for the BP Supper. Please keep up the support for our social events.
Swapping partners: Skua has gone Hyde for their white sails (as has Harlequin). Swift has gone North (so to sp) and Solitude has gone Batty.
Respect: James Birkett finished half way up the fleet in BP R2. Nothing remarkable about that you might think except he was sailing single-handed!
Osprey is currently using a spare mast - their new mast (ordered from Selden in October) is yet to arrive!

GDPR
The CC has signed a declaration on behalf of the Class for the benefit of the Club saying that we shall do the right thing! Those involved with non-member enquiries and who hold info on eg. new and available crews must abide by the new rules for data protection.