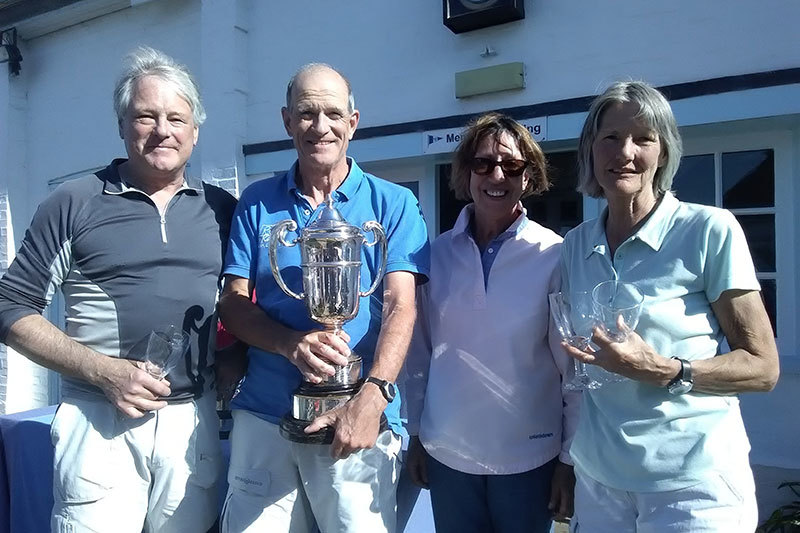 What a wonderful day's sailing! 2UP in the morning in 'just perfect' conditions with Skua always in front having got away cleanly at the start from the 9 boat fleet. Svala, with Nigel Masding at the back end, began to apply pressure but canny Harry was not going to yield despite Svala narrowing the gap to within striking distance several times. Goosander's flash new North sails enabled them to quickly advance through the fleet on the opening beat and Tim and Simon held a comfortable 3rd for the rest of the race.

There was some anxiety (with a lunchtime pint in hand) about whether the forecast increase in the breeze would actually happen - the sun continued to shine but those tell-tale downland clouds were elusive. Nevertheless the sea breeze did arrive JIT and we (14 boats) enjoyed a fabulous sail in F4 and at the top of the tide. Skua did their party trick of approaching the line on port before tacking beneath their chosen starboard 'victim' and then squeezing them out, capturing the pin and, well, the rest is history (repeating itself!). Blue Tit looked strong in 2nd for a while (and eventually finished 3rd)) but once more Svala was the main challenger, this time with Hugo on the stick but Skua has always liked the look of the fantastic Shippam Challenge Trophy and wasn't about to let their name be scrubbed off.

The Race committee within which our new, Swallow-owning RCS was key delivered superb courses in, as ever on Regatta Day, busy conditions with multiple differentially-paced fleets at Betivuka requiring regular course changes on the 5-minute gun. Add to that a request from WWSC to 'stay away from Dunes' only increased the challenges! Beach took a bit of finding but other than that everything went incredibly smoothly with few inter-fleet clashes.

The harbour looked great, the ISC keelboat fleets (totalling 50) made for a stunning display (and gave something for the paltry fleet of Elites that were out something to think about), and the Club improved the tea experience (ugh!) from yesteryear. You should not have missed the day.
1st 3 Skua (Harry and Prue with Nick Boyd)
2nd 89 Svala (Hugo, Nigel and Richard House)
3rd 80 Blue Tit (Andrew Dunlop, Tom C-S and Paul G)
4th 66 Buccaneer (Mike and Bettine Bond and the bloke with a funny hat)

The Bembridge SC visit this coming weekend 9/10 June. We need volunteers for the welcoming team, for the crew swaps on Saturday afternoon, and those able to come to the informal dinner on Saturday evening. We will be in Bembridge for our Championships next year so do come along and make their acquaintance or renew friendships. Please let the CC know how you can help asap.
It's Points Week starting on Monday 11 June for the Buccaneer Trophy. Now officially known as the Itchenor Keelboats Points Week supported by Strutt and Parker (catchy isn't it) you will find the normal cocktail of HW racing (thank you to Roger Wickens and his erstwhile team yet again) and social events still either free or ridiculously cheap. See the attached schedule of events here. Please book yesterday to avoid disappointment.
Of course you will still have the energy and enthusiasm to sail on into the following weekend and partake in the CYC regatta (Sat) and TISC (Sunday). That weekend's am races start at 10.00 to accommodate the earlier than normal pm regatta races.
Don't forget to enter CCW asap we want our own start and full programme recognition!
On Saturday 23rd June we will be racing OOH! This is your opportunity to optimise your boat (and crew) for the forthcoming Championships in Hayling Bay. Please make sure you have all the required safety gear as there may be inspections (nb hand-held radios mandatory for ISC OH racing and for CCW/CW).
Have you selected your helm for the sons and daughters race on Saturday 30th June pm? If you have non-sailing kiddos then a cousin or some-such will be welcome as long as there are family links and a youthful element there will be (free) entry details in the next SN. Depending on conditions on the day we shall probably have staggered (?!) starts to minimise any possible risks.

The libel lawyers have now been appointed.
Skua graciously filled the fabulous (and voluminous) Shippam Trophy with fizz for us all to imbibe. Communion with a difference thanks Harry and Prue.
Good to see Robin Knibb and David Eglinton take Boomerang out for both races on Regatta Day their first races. The girls are still on their training course.
Gotta love those brand new North sails on Goosander. Instant windward speed and that spi looks powerful too.
Spare a thought for the RCS as ARO on Regatta day. 'Unaccustomed as I am' (to watching Gwaihir down the fleet).
Plaintive and perfectly-timed interjection from Charles when Wiggers said at the prizegiving that the Fisher family were having a good day - "not all of us"!
We still await the real battle of the Titans the NM weekend lacked one and the Regatta two. Keeping their powder dry? (Or could you be one of them?).

Stewart Morris Trophy - Itchenor vs OCSS Sunday 20th May
Result: Tied 3 3.
The annual match between Itchenor and the Society for the Stewart Morris Trophy was held in sunny weather, as always, but we were met with limited wind and a big flood tide. A strong O&CSS team with great experience and significant maturity had been assembled, augmented by an injection of youth. They were led on the water by the current President and were determined to reverse last year's defeat. The home team itself was half comprised of Society members.
Chris Darling the race officer very ably set a short rectangular course not far off Cobnor Point (whose eponymous elegant white house was once occupied by Martin Beale, a past O&CSS President). The shifting and fickle south easterly gradient wind battling against a potential sea breeze required frequent mark relocation.
Itchenor won the Race 1 start and seemed comfortable with 1, 2, 4 at the first mark, but the run down against the tide gave the Society opportunities to wriggle back into contention and to win with a 2, 3, 5. The second, third and fourth races were, however, emphatic wins for the home team being mercifully shortened to avoid further processional embarrassment for the Society. It had been a very tricky morning with a most difficult wind, fading to nothing from time to time and then picking up in patches. Moreover we had had to contend with all the Mirrors, Scows, other Swallows and Cruisers choosing to occupy the same patch of water.
Back to the Club for lunch and Itchenor were feeling confident with their form for the day based on a lead of three races to one.
By the afternoon nothing had improved out on the water: the wind was equally difficult and the flood stream had increased significantly. Race 5 had an individual recall signal but only one boat went back. The Society finished 1, 4, 6 on the water, led out nicely by Josh Flack, but an Itchenor boat had failed to return and its OCS gave that race to the O&CSS. Although the wind still refused to improve, Race 6 was perhaps the most enjoyable, with some team racing tactics now workable - notably between Henderson père et fils (père winning.). Despite a poor position after the first round the Society pulled through to win with a 1, 2, 5.
It was now three races all with a suggestion of a sea breeze creeping its way up harbour showing a tantalising but ever-distant flurry of blue on the placid surface of the harbour. However the day was passing and the course would need to be completely re-set. We agreed to avoid the delay and uncertain outcome and called it an honourable draw. Just as the ebb run was starting to gather pace the fleet returned for tea and cake and joint presentation of the Stewart Morris Trophy to the two Captains.
Overall result: Tied 3 - 3 (Itchenor races 2, 3, 4; Society: 1, 5, 6).
Teams
O&CSS:
Josh Flack, Vincent Geake, Will Henderson, Ian Macdonald-Smith; Roger Palmer, Mark Struckett.
Itchenor:
Simon Slater* (capt), Malcolm Green*, Arthur Henderson*, Alastair Impey, Philip Pascal, Mike Wigmore.
*also OCSS members